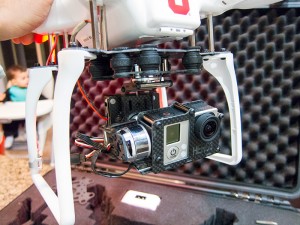 I’ve been dying to take a flight with my DJI Phantom quadcopter with a gimbal in action since I ordered my first gimbal in October.  FYI: Gimbals do their best to keep the camera level to help produce better videos and photos.

After going through one defective and less sophisticated gimbal, I finally got a 3-axis model by Arris, a CM3000.  Today was my first real flight.

The gimbal works!  The camera stays level and the video/stills look great.  There’s a bit of jello effect in the first video and I’m hoping that is because I forgot to tighten the camera mount.

There was a bit of wind and despite that the video looks great.  No horizon shift.  It is LEVEL the WHOLE time.  That is very cool.

IT is quite amazing that the video is so level, especially considering the lack of handling and the amount of wind there was.

On the second flight I had a hard time landing the unit, so for the first time I just caught the Phantom in my hand.  Did it without chopping my eyeballs to shreds.

Deep breath… okay.  I knew adding the gimbal and the associated landing gear extensions that the flight time and performance would be affected.    Affected is an understatement.

On the first flight the Phantom took off seemingly fine.  Naturally the unit seemed sluggish and less sporty as compared to the lighter version.  Responses seemed slow and sluggish and the unit doesn’t climb as fast.  Also, when reducing the throttle the unit drops, hard.

I can deal with the performance issues though.  I’m not worried about performance if I’m trying to get smooth video and decent pictures.

As always I timed my flights, which there were three.  After seeing the red warning light indicating that the battery is close to being dead on the first flight, I started to pilot it back to myself for a landing.  The unit started descending and would respond not throttle up.  10 feet from me it collided with a fire hydrant of all things, ending up face down in the mud and snow with the gimbal jerking itself trying to level.

A couple of scuffs and not any damage.  A look at my timer showed around four minutes.  FOUR minutes.  Normal flight time with no camera is 12-15 minutes.  The basic setup with the camera and jello mount is 8-10 minutes.  Could this extra weight of the gimbal and landing gear extensions reduce my flight time to four  minutes?  There was some wind, but still that is not a good number. The next two flights would confirm that I had under four minutes, closer to 3:30.

I weighed the whole unit and it is coming in at three pounds or 1360 grams.  That’s simply too heavy.

I will be removing the landing gear extension kit and seeing if the gimbal will function with the regular landing gear and the plastic snap on 3D printed feet I bought on eBay a while back.  I think I could knock it down quite a bit.