A few nights ago I took off to do some low light photo tests.  I flew above an uninhabited construction zone near my house.  I decided the shots would be great if I got the hexacopter to a very high perch so I ascended, keeping it in sight.  The newly installed LED lights made seeing the bird very easy.

I proceeded to shoot photos while leveling off the bird.  Suddenly I was puzzled to see no lights and hear no prop sound.  In the dim light I could see the hexacopter freefalling, and fast.  I’d been flying in attitude mode so I flipped the transmitter into GPS mode quickly.  It was the only thing I could think of.  I could hear the props spin up and the bird hit the air brakes as hard as I’ve ever heard/seen.  In what seemed like only a second or two, the hexa was hovering in place.

I brought the bird down and nervously landed, tipping over in the grass but causing no damage.  I anxiously checked the arms and motors, figuring something had come loose.  The structure checked out fine.  All solid.

I’m glad that the SuperX flight controller I use keeps flight logs.  In the logs many stats are kept from the flight like altitude, speed, heading, motor thrust percentage, flight modes.  The log also shows an animation of the location overlayed onto a google map.  What I found in the logs was quite stunning.

Due to the night flying and the brightness of my LED’s, I’d flown far higher than I had realized or intended.  The bird was at the highest logged altitude I’ve ever flown, 760 feet.  Not only was it much higher than I thought, it was much farther down range than I thought as well.   The fall was a total of 460 feet.  Had my altitude been lower, the bird would have been demolished as I would not have had time to recover attitude.

Somehow I saved the hexa from what was surely to be complete and utter destruction.  I need to get some altitude telemetry and FPV (first person view) installed so I can make sure the copter is safely where I intend it to be.  I’ve flown twice since, very conservatively.  Flights only 60 feet high and perhaps 75 yards down range.

I’ve been very happy with the latest results of my flight tests with regards to the smoothness of the video and the gimbal performance.  The only current issue to resolve is that the arms and propellers are sometimes in the video and photos.  The less aggressively the flight, the less the issue occurs.

So the current need is to lower the gimbal/camera so that the unwanted items are not in the display.  One caveat to that is that the landing gear may become visible.  Another possible issue is that the longer the throw between the camera and the body of the bird, the bigger effect it will have with the overall balance as well as vibrations. 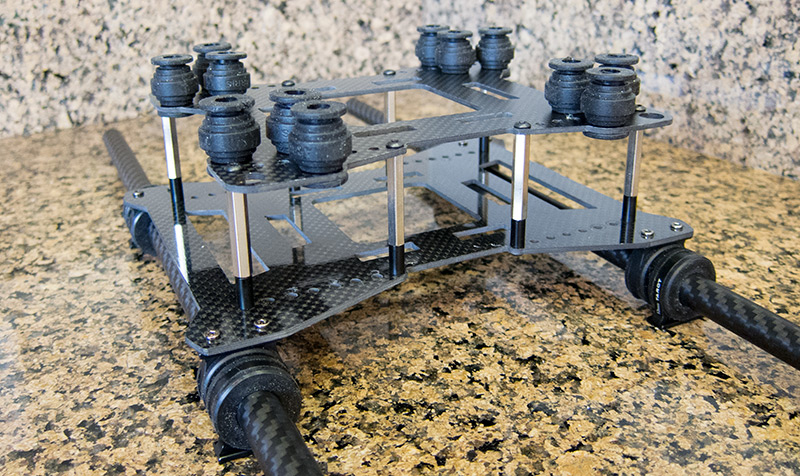 The first test today will be this setup (above and below pictures), adding about 1.25 inches of extension. 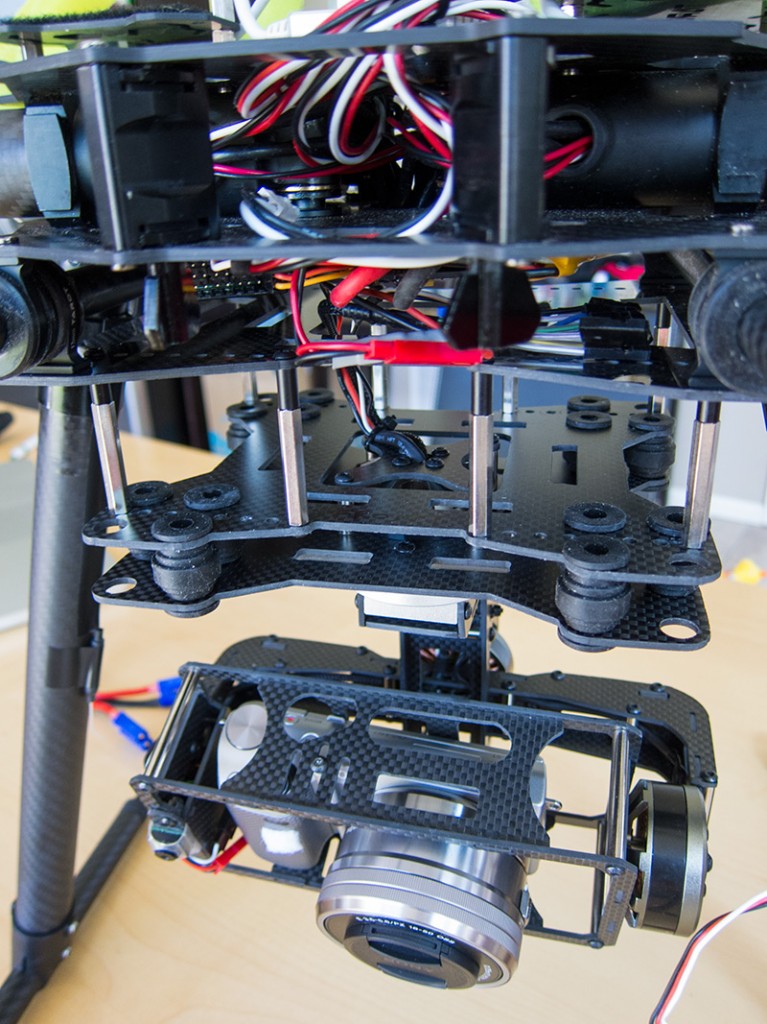 I’ll check for props/arms/landing gear in the video as well as video clarity.  I’ll also check the vibration in the SuperX flight controller logs.  Also should note how it flies, as the center of gravity of the copter will be affected.

I’m ready to post a video now of some low light flight testing.  I recalibrated the gimbal in order to fix the issue where it would roll a few degrees one way and make the video look like the original Batman movie from 1967.  It would appear that issue is fixed.

The video settings on the camera are all AUTO, except for the focus which is manual/infinity.  The results are quite remarkable in low light.  The Sony NEX beats the living hell out of a GoPro in low light.