This video is a reminder to those of us who fly to be careful. Even when all possible precautions have been made it’s still possible for some kind of failure to cause a crash.

I did some stop motion on the bird that crashed and it only has four arms. My best guess is this is (was I guess) an X8 configuration with two props per arm. Either that or it was a really big quadcopter. I doubt it was a quad though, as the more pro filming rigs will be X8’s for more redundancy.

New Motors On Order for the Alien H4 Quadcopter 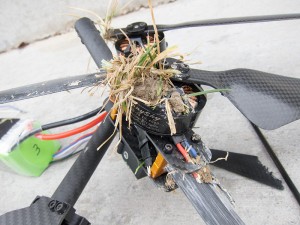 After hours of trying to reduce vibrations in the Alien H4 680mm quadcopter drone, I’ve decided to order two new motors.  I’ll be replacing the two motors on the rear of the craft.  Despite all the attempts to balance the motors, especially motor #3 (left rear), I’m taking a guess that one or both of the motors are damaged from the crash, or even perhaps the first flip.  The vibration is practically visible on motor #3.  I can see the landing gear visibly moving.  Touching or even getting close to touching arm #3 “tickles.”  It is obnoxious and no wonder I can’t capture any decent video.

Two new motors are on the way on the slow boat from China.  I will balance them before installation, which I should have done before.  Once the new motors are installed I’ll tear apart the old ones and check to see if the bearings or the prop posts are broken or bent.  That would cause the vibration problems.  If I can fax them, then I’ll have a couple of extra motors.

I’ve been semi-happily flying this new Alien H4 680mm quadcopter build.  I say semi-happily because I’ve been in jello hell, trying to get rid of the video vibrations and wobbles.  That, and the new landing gear I installed included one unit which was defective.

I spent a week (not 24/7 but you get the concept) balancing props and motors (motor balancing video coming soon) and reduced the overall vibrations quite a bit.  I was out flying over a construction area, where there’s some open dirt and a few unoccupied homes being built.  I was testing to see if I’d gotten rid of the GoPro jello effect.

That’s what I made a mistake that I was not aware of until it was too late.  Suddenly the bird started to nosedive.

It crashed in some very soggy sod behind one of the new houses.  One arm and prop was so impaled, it took almost all my strength to get the arm out of the ground.  There was quite a bit of damage, though mostly small and inexpensive parts totaling up to about $120.00.  The cost could have been far worse.  The hours it will take to get it repaired, after waiting for parts from China, is the real pain.

Fortunately the MiniX flight controller keeps a log.  That way I could look at it to see if any information could help me diagnose the cause of the crash.  The log showed me some good news and bad news.  The good news was that the crash was not due to any kind of equipment failure.  The bad news was that it was user error.

I unknowingly had flipped into manual mode, thinking I had flipped to GPS mode.  At 177 feet the props stopped spinning enough to keep the bird airborne.  Seven pounds of carbon fiber, metal, and plastic hits the ground in about two seconds from that distance.  No time to react.

I couldn’t believe the log and that I’d been such an idiot flipping to manual.  A look at the switch on the remote confirmed MY error.

I never fly manual and I don’t intend to with this, or any of my copters.  I don’t do trick flying.  My ships are for aerial photos and video.  I plan to either disable the manual switch (not the best idea in case of emergency when GPS fails or somesuch thing), or set my remote to delay 5-10 seconds and produce an audible “manual mode will activate in five seconds” type of thing.

Below are a few stills from the crash video.

Battery is UNDER the bird.  This is not supposed to happen…

Battery ejected on impact. Velcro straps shaved off with razor precision. Gimbal vibration ball on left flying through the air.  Long rectangular donut-shaped item is one of the gimbal control board box’s side panels, about .5 inches wide and 2 inches long.  It must be right in front of the GoPro lens.

Motor arm sure looks far away…

FPV camera left of tree points back. Too bad it was unplugged and not recording the view looking back toward the GoPro..