I just read this Wired Magazine post and saw this new video release by GoPro (below). It is a sneak preview of footage shot by the new GoPro drone which is slated for release in 2016. The Wired writer says “What’s amazing is the perfect, almost dolly-like stability of the shots of an idyllic farm and a journey through the forest.” See for yourself:

I agree the footage is smooth but take a close look at the video. Watch the leaves in the trees. Watch the dust stirred up by the ATV rider. None of the shots were captured during any wind. Any at all. Like not even a breeze caused by a flea sneezing.

Just about any currently available drone with basic GPS or altitude stabilization could capture video as smooth in the same conditions, and they already are. Before I wet my pants with excitement over the new GoPro drone (need a waterproof case if so), I’ll have to see it in action in varying conditions. I’ll also be curious to see flight times, features, FPV (first person view), the size of the unit, and all sorts of other features in which GoPro has a chance to show its innovation.

Then I’ll be excited.

A couple of days ago I did a flight over central Utah’s Goblin Valley State Park. This is a very unique place full of thousands of rock formations known as hoodoos, which look like goblins. Thus the name. 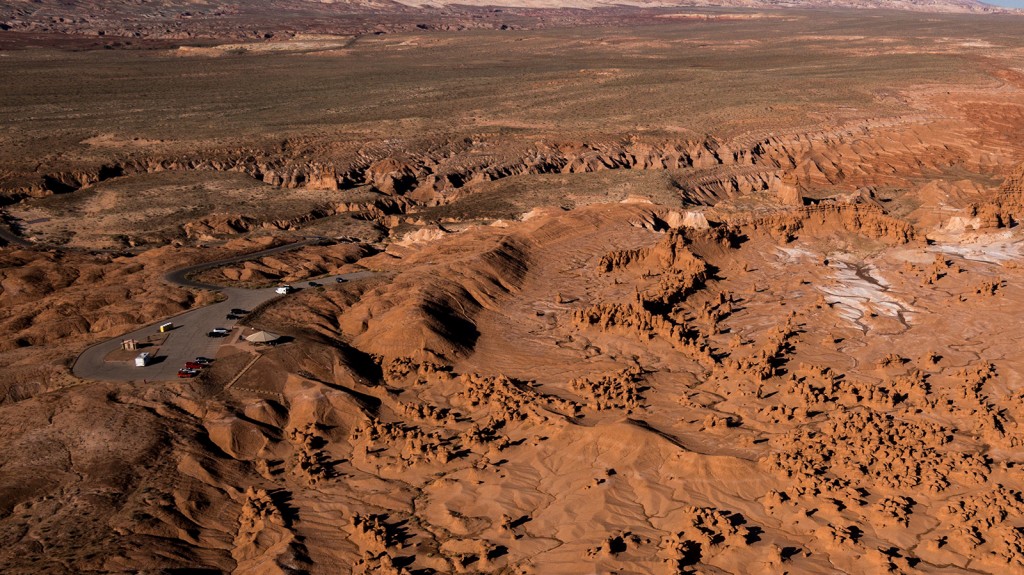 On the ground the area is like a maze but I was curious to see what it looked like from the air. I checked with the park ranger first and made sure I had permission to fly the area. I did one hexacopter flight during which I was able to capture 375 photos. 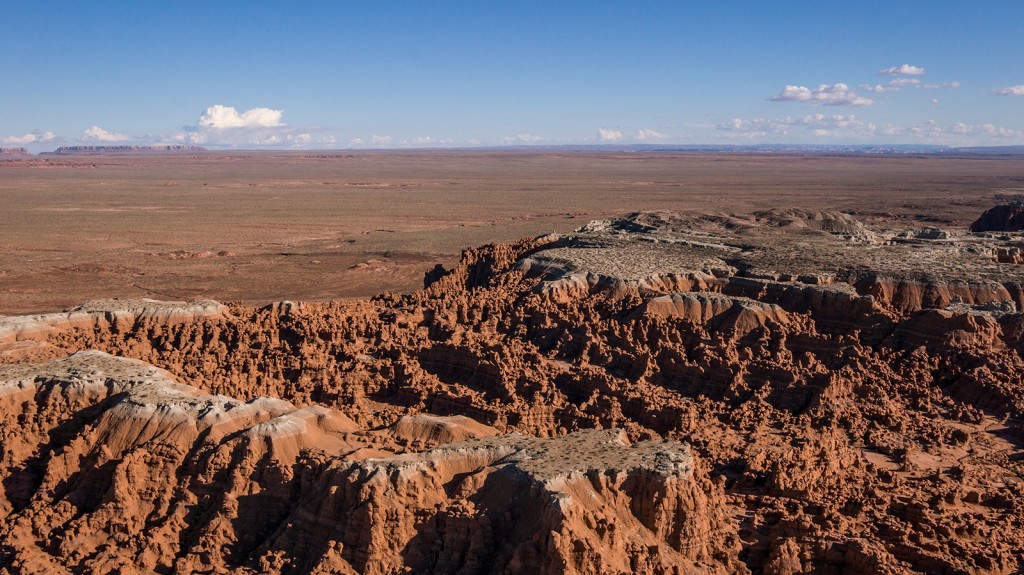 I would have done another flight or two for some video footage, but the battery on my camera died. Shooting that many photos ate the battery up quickly. 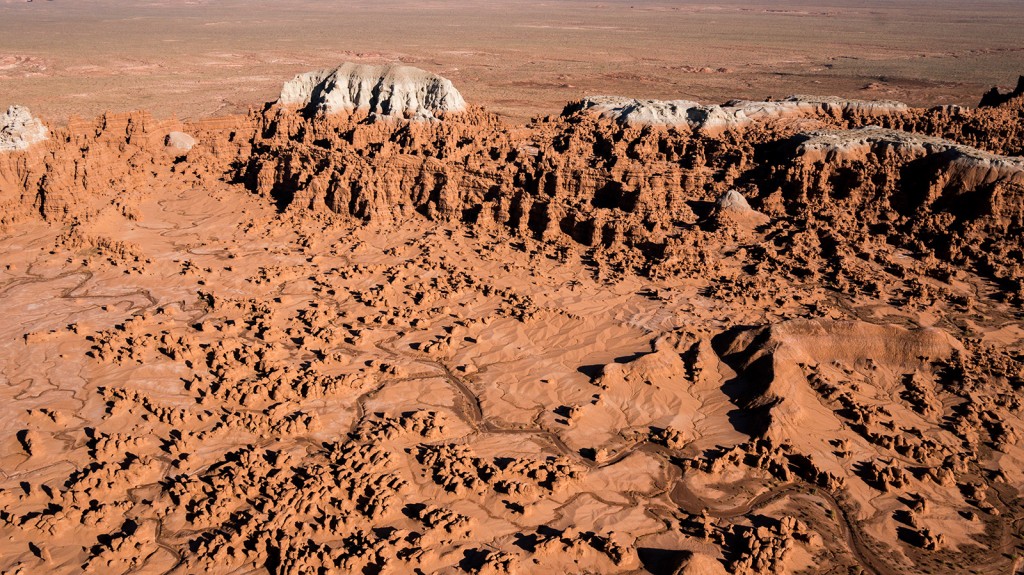 I should pick up an extra battery for that camera, or perhaps find a way of supplying the camera power from the bird. 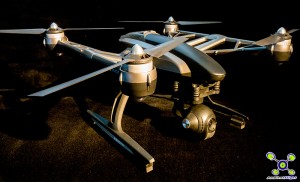 “We are excited to be launching a partnership with the country’s largest and most recognizable consumer electronics retail chain,” said Shan Phillips, CEO of Yuneec USA. “Yuneec offers options for every type of drone pilot or photographer with the Typhoon 4K, Typhoon G, and Typhoon Wizard, and the Best Buy partnership is perfect timing for us to introduce our best-in-class drones to consumers across the country.”

The Typhoon 4K produces unparalleled 4K video quality and 12 megapixel still images while delivering Yuneec’s standard of ready, easy and safe flight to pilots everywhere. Perfect for both skilled and beginner drone pilots and photographers, the drone is an aerial and ground imaging solution offering up to 25-minutes of flight time while filming with its 3-axis anti-vibration gimbal. In addition, the Typhoon 4K comes with a standard ST10+ Personal Ground Station remote control featuring a 5.5-inch Android touchscreen display, and a SteadyGripTM for ground shots.

Yuneec will also be offering the Typhoon G for GoPro® users. Typhoon G includes a 3-axis self-stabilizing gimbal designed especially for the GoPro® Hero3TM and GoPro® Hero4TM. The gimbal can be mounted on the Typhoon multicopter and on the SteadyGripTM ground handle – a device ensuring ground shots are as smooth as those taken from the air. While flying the Typhoon G, real-time image transmission is achieved with the included digital video downlink module and can be viewed on the ST10+ Personal Ground Station remote control. The SteadyGripTM features precise, on-the-go camera angle control, and uses a mobile device with a display of up to 6.4 inches.

To ensure Typhoon drones are safe for consumers, all the drones include features such as Geo-Fencing, Speed Control, Dynamic Return Home, Low-Battery Return Home, FAA No Fly, Follow Me and Watch Me. “Yuneec drones are not only easy and ready to fly, but we guarantee a high level of safety that is perfect for both beginners and experienced drone pilots,” said Phillips. “For example, when you are finished flying, the pilot simply uses Dynamic Return Home, and the drone will automatically land between 13 to 26 feet of the ST10+ Personal Ground Station remote control.”

To make it even simpler to capture life’s memories from a bird’s eye view, Yuneec has created the ultra-lightweight and compact Typhoon Wizard, which allows pilots to control their Typhoon multicopter with the use of only one hand. The Wizard includes all the convenient features Yuneec pilots are accustomed to, such as following the user at a set distance. Pilots will benefit from the convenience and portability of the included water-resistant carrying strap, which allows for hands-free navigation. The Typhoon Wizard is compatible with the entire Typhoon series of drones.

About Yuneec International
Founded in 1999, Yuneec is the world leader in electric aviation. With hundreds of patents held, Yuneec’s core technologies power manned aircraft, Typhoon and Tornado drones and its market-leading line of radio controlled aircraft for the hobby market. With offices in North America, Europe and Asia, Yuneec manufactures over one million units a year that are sold under OEM/ODM brands as well as the Typhoon brand of multicopters. The company’s achievements include the introduction of the industry’s first “Ready to Fly” radio controlled electric powered airplane, and the design and manufacture of market-leading radio controlled helicopters and microcomputers.