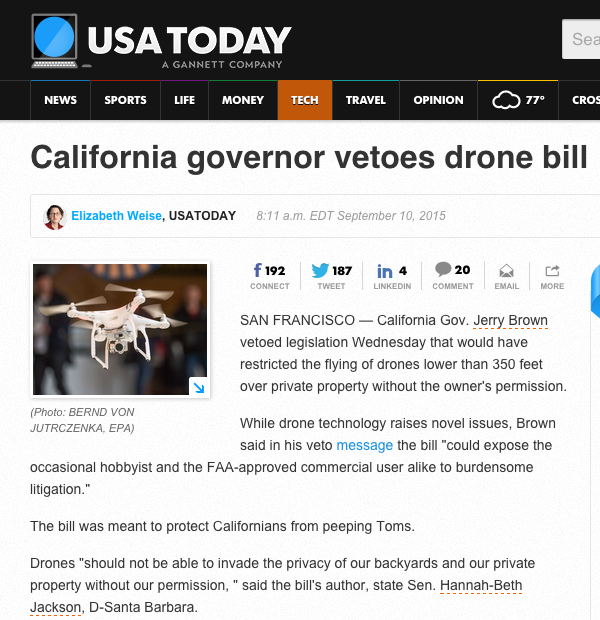 This has been eating at me for two years now, so it is time for me to issue an official public apology for using one of my drones to invade someone’s privacy.  A couple years back I was in Las Vegas and excited to test out my new “quadcopter” drone, which was equipped with a GoPro camera on it.  I was at a golf course and launched my drone from the parking lot.  I flew up to about 100 feet and captured this picture below.  I had no idea what was in the picture when it was shot.  The GoPro was shooting photos automatically, every 10 seconds.  In the picture you can see the red arrow which points to a golfer in the fairway on one of the holes.

The media is full of invasion of privacy articles involving drones lately. People are shooting at drones with shotguns.  They’re calling police.  There are altercations.  It’s crazy.  There’s quite a stir going on. All of this attention has been really getting to me and I’ve been losing sleep knowing this this poor golfer in the photo had no idea I shot his (or her) picture. I can’t tell if the golfer is male or female since it’s just basically a tiny distorted dot in the photo.  Actually, I’m not 100% sure that is a golfer, but I think it is.  It might be a 150 yard marker.

To the golfer in the photo above (if you’re really a golfer and not a 150 marker), I sincerely apologize for taking your photo without your permission.  I deeply hope this photo has not caused you any emotional damage, and that it has not had any adverse effect on you or your family.   I understand if you feel legal action is necessary, but I hope that you consider this apology before doing so.  I have not sold or licensed this photo and have not made any financial gain from it.

Once again, you have my sincere apology.