While on vacation with my family and my large hexacopter in the car, we stopped by for some hiking and sight seeing at the amazing red rock area Valley of Fire State Park, about a 40 minute drive northeast of Las Vegas. I had to pull over and take a picture of this sign. 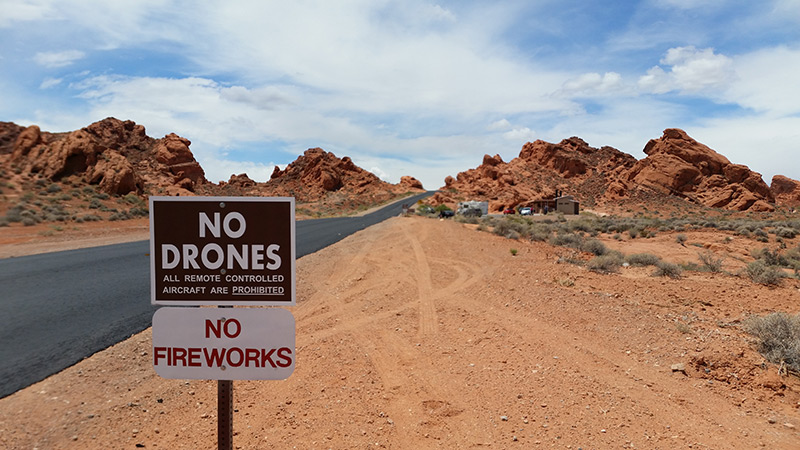 Entrance to Valley of Fire State Park, Nevada – Unfortunately Signs Like This Will Be More and More Common

Valley of Fire would be a goldmine for aerial photography and video. It would also be a terrible place to crash, either into the red rock or into tourists. I can completely understand why they have a no-drone policy and for those of us who fly I think these signs are going to become more and more common.

While at Utah’s Snow Canyon State Park I talked to the park manager about drone flying there. She said they allow it via permit and that she was the one who have out those permits. A two week notice or more is needed to get the permit. When applying for the permit, information like where and when and for what purpose is required. She didn’t say no, yet.

I was told that state parks have individual regulations with regards to drones, so before you go give them a call. You might have to jump through a couple of hoops but you may get the chance to fly and capture some great material. Be honest and upfront with them and they’ll treat you with more respect.

So this is basically a drone with no remote. It stays level via sonar and shoots pictures or video of you for the coolest selfies ever.

I do wonder about using this outdoors though. With no remote a slight wind could take it away, never to be seen again.

Wow this poor kid… I had a guy come at me a while back, citing that I was invading his personal space. Meanwhile he was drunk at 2PM and walking around with a beer in his hand, which is illegal in public in Utah. I was nowhere near the guy and not “taking pictures of him.” People are so dumb to this technology, and paranoid. One of the reasons I’m not flying that much lately.