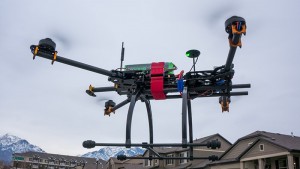 I’m happy to report that I’ve gotten my Alien H4 680mm quadcopter airborne.  The maiden flight didn’t come off without a hitch.  It took two maiden flights and the aid of the lovely bride with a hands-on-bird test to get things figured out.

In a rush of excitement to get the bird flying I skipped a step, which was not a good idea.  That step is the hands-on holding of the craft by the lovely bride, while I call out the commands I’m sending to it.  “Left, right, forward, backward…”

On the first two maiden attempts I was running out of daylight, and thus hurrying.  Not a good idea and if I run into the same situation I’ll be more patient and wait until the next good opportunity.  The first maiden produced a backflip.

After checking, I’d hurriedly put the back two props on the wrong motors.  Dumb.

While having the wife video record the second maiden, I gave it some thrust to take off and it quickly flipped to the right.  Two props broke off and one piece flew right past the wife’s face.

I double checked that the props were on the correct motors so that indicated a much more serious problem.

I triple checked the motor rotation in the the copter lab.  I was 100% sure they were spinning the right way.  The next thing to confirm was that the motors were wired correctly.  In other words, output one of the MiniX flight controller was going to motor one.  Output two going to motor two.

In making it so small, the XAircraft MiniX flight controller has four sets of motor outputs, yet can still control eight motors.  They do this by sharing grounds, and having each other pin be either motor 1 or motor 5, motor 2 or motor 6, motor 3 or motor 7, and motor 4 or motor 8.  They provide a “Y” servo cable which splits each of the dual motor outputs into two.

That part is a little confusing and there lies the source of the problem.  Somehow I had some motors wired to the wrong outputs.  I’m not exactly sure which ones either.  Once I had unplugged all outputs except one motor, and a different motor spun up, I knew it was messed up.  I pulled all the motor cables and started over, much more diligently testing each motor and output individually.

Once I was convinced I had the motors wired properly I did an in-hands test.  I had the wife stand with the bird above her head while I commanded it to move to one side or another.  I’d tell her which side, and she would verbally confirm.  I could also see it moving that direction.

Once the in-hands test was successful it was really time to try the maiden.  I will not ever skip that step again.

On the third maiden attempt I gave the motors very slight throttle until the bird started to move and eventually took off.  If it was going to flip or freak out again, I didn’t want it to have too much velocity.  Below is the maiden video.

After some tweaks I took the bird for a light flight with a lot of hovering to check stability and record logs. The quadcopter flew for 14 minutes down to 3.6 volts per cell in a 6-Cell (6S) battery.