ONTARIO, CA (September 2, 2015) — Yuneec International, the world leader in electric aviation, today announced the launch of the Typhoon G for GoPro® users. The newest member of the Typhoon family is designed to provide smooth and stable aerial footage for the crisp GoPro® camera. In addition, the Typhoon G continues to deliver Yuneec’s standard of being ready, easy and safe for consumers everywhere. 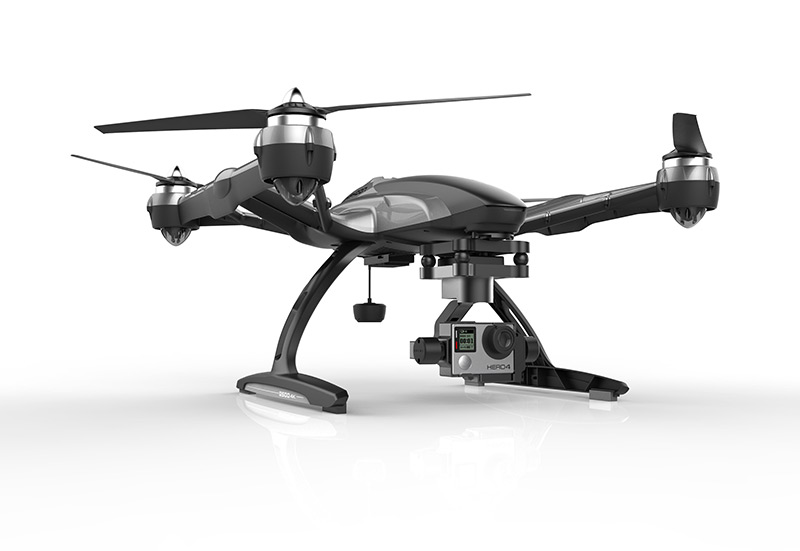 The Typhoon G has several smart features that ensure safety and ease of use, which consumers have come to expect from the Typhoon series. Features such as Geo-Fencing, Speed Control, Dynamic Return to Home, Follow Me and Watch Me are built into the Typhoon G system.

“We believe the Typhoon G will be the aerial and ground imaging solution of choice for GoPro® enthusiasts because it provides the most stable imaging available,” said Tian Yu, CEO of Yuneec USA.

The new GB203 3-axis self-stabilizing gimbal is designed especially for the GoPro® Hero3TM and above. It can be mounted on the Typhoon multicopter and on the SteadyGripTM ground handle – a device that ensures ground shots are as smooth as those taken from the air. While flying the Typhoon G, real-time image transmission is achieved with the included MK58 digital video downlink module and can be viewed on the ST10+ ground station. The SteadyGripTM uses up to a 6.4-inch mobile device as a display, and features camera pitch control for precise camera angle control on-the-go.

Typhoon G is made for the GoPro® user, and comes ready-to-fly in a color box with a ST10+ ground station, a handheld SteadyGripTM for stable ground footage, one battery and a smart charger for the suggested retail price of $999.99 USD. For more information visit www.yuneec.com.

GOPRO, HERO, the GOPRO logo, and the GoPro Be a Hero logo are trademarks or registered trademarks of GoPro Inc.