Last week I managed to roll some video with the new gimbal down in southern Utah.  The results were fantastic.

I’m limited by the air time I have though, at a safe time of about four minutes with the reduced setup (3-axis gimbal, small mount, 3D printed landing gear extensions, stock DJI Phantom 1 battery).

Some friends critiqued the video and made some great suggestions and observations.  One observation is that there’s still a tiny bit of “jello” effect at some points.  The jello effect comes from the drone vibrating the camera.  The video shakes and looks like jello shaking.

Two directions to go with the jello are to balance the propellers and to work on the mount for the camera.  I did both, and tried some new batteries.  There were good and bad results.

The new batteries are 2700mAh compared to the stock DJI batteries which are 2200mAh.  The net result was over seven minutes in the air, a great improvement.  Since the battery is bigger though, it is much harder to get into the craft.  Good.  More flight time.

I thought perhaps that the rigged setup I had last week was part of the reason for the slight jello issues.  The new gimbal came with eight jello reducing rubber grommets and I flew with four.  That’s the only way this rigged setup would work.  First test today I put back on the small mount with eight jello reducers.  The problem there is that the mount blocked the battery door from opening all the way.  So I got some throw-offs at a local electronics store and lowered the mount half an inch.  See image below: 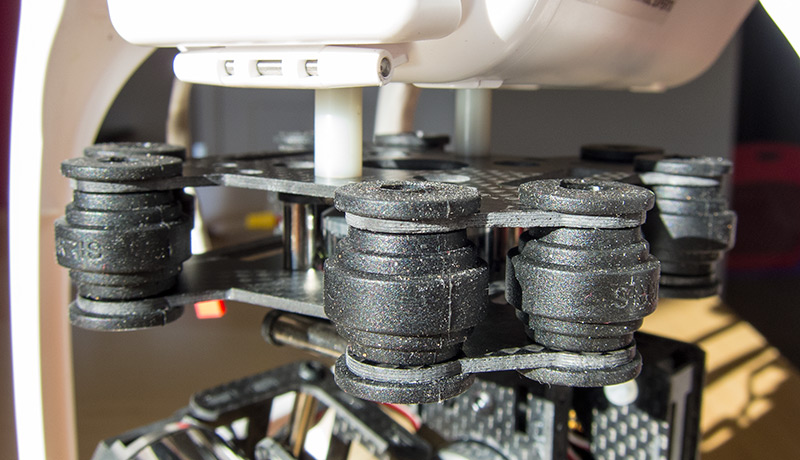 The result was horrible.  The camera and craft were jiggling terribly.

At that point I decided to go back to the big mount and leg extensions which I purchased with the gimbal.  This time though I went with the shorter of the two possible setups (image below). 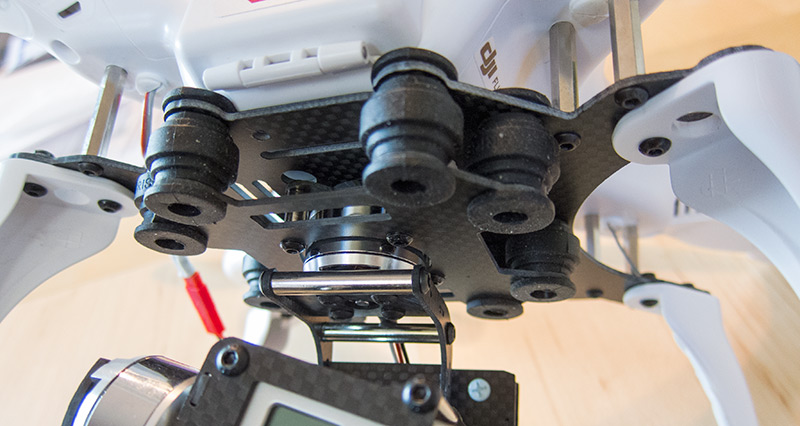 I ran into some jello issues again.  I’m thinking perhaps the reason is that the eight grommets are too solid and don’t isolate the camera from the body of the copter.  So my first test tomorrow will be to take four of the eight grommets out and see what effect that has on the jello.

Another small issue too, is that the blades are sometimes visible in the video frame.  This issue may lead me to putting the longer leg extension setup on, as it moves the camera farther from the blades.

To make a long story longer, I’ve increased flight times which is great.  I’m not satisfied with the shake reduction yet and still working to improve that issue.

On the jello effect, I understand running the video at 60 frames per second instead of 30 helps.  I may try that too, but unfortunately I think the GoPro will not allow the timelapse photo mode to run simultaneously with the 60 frame setup.  Right now I’m shooting 30FPS video and photos every two seconds, which is great.