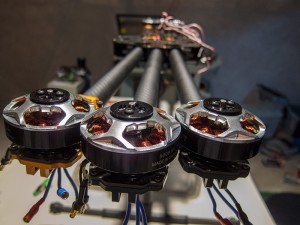 Friday I was competing in a local golf tournament at the area’s most scenic golf course.  As the tournament was to start at 10 a.m., there was an opportunity for me to get some flyover videos and photos of this great place.  As the sun was coming up over the mountains and the morning dew was glistening, I found a perfect spot to launch the big hexacopter.  From this spot on the 2nd tee I’d get holes 1, 2, 3, 10, and 11.

Upon power-up though, two motors beeped constantly and the SuperX flight controller LED light indicated problems.  The bird was not fit to fly.  I sat there looking at the absolute beautiful conditions, blue morning sky and sunrise, and NO wind.  I was gutted at missing this opportunity.

My first guess was that somehow the two motors (5 and 6) needed to throttle calibrated again.  Friday evening I started the calibration, but since the power was out at my house I couldn’t work too well on the bird.  Over the weekend I re-calibrated the transmitter’s stick ranges, re-calibrated motors 5 and 6, and re-calibrated the compass.

The motors still beeped and the LED indicated errors.

I plugged the SuperX into the computer to see if the configuration was perhaps reset to a quadcopter instead of a hexacopter.  That would explain why only motors 1-4 would arm.  The flight controller shows up like a hard drive on the computer when plugged in.  That’s when I realized what the issue was.  The software which drives the flight controller was GONE.  Somehow the files were deleted or corrupted.

Simple solution, right?  Reinstall the software.  Not so simple.  To get it, one must log in to the XAircraft website and punch in the “unit ID number” which is found…. wait for it… when you run the software!   I had to send out feelers to the online community and to XAircraft for someone to send me the file SuperX.exe.  It took two days, but I finally got my hands on it.

Once the files were back on the controller I was able to find my unit ID, which I’ve now saved in case something like this happens again.  I successfully downloaded and installed the firmware to the controller and upon first tests, all motors were able to arm.

I nervously took the bird out to the driveway and launched it.  It drifted quite a bit and something was off.  It only took a second or two of flying to realize that the yaw axis was reversed.  Left was right when rotating or when banking.  I had to land and reconfigure.  Landing was quite challenging and nerve racking as the bird was drifting and the yaw controls were reversed.  I managed to land without damage.

At that point I realized it was probably a good plan to do the ENTIRE setup/calibration over.  It was the only way to make sure everything was correct.  After doing that I took her for another flight.  This time the bird flew solid.  The yaw axis was correct and it responded as it should.  I’m thinking I might go back down to 1.1 on the gains instead of 1.2.  Also the gain knob somehow has been set to -33%, rather than zero.  I’ll have to fix that.

It took three days (not 24/7 hours) of troubleshooting to diagnose and solve the problem.  The copter is 95% back to where I had it prior to this issue.  I’m not sure what caused the files on the flight controller to simply disappear.  I’ve read that virus protection software in Windows could be a cause, but I run a Mac most of the time.  However I do have to run Windows to configure the software.  I theorize either some kind of static problem, or perhaps in running Windows and Mac simultaneously with the controller plugged in something was messed up.

I’ll certainly be more cautions when attaching the FC to the computer and when I’m powering it up or down.

I’ve got that other 5% of tweaks, then I can get back to finishing off my FPV setup.