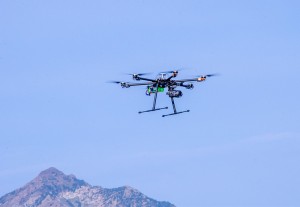 Last week while I was flying in a large grassy area open to the public a man and his wife were some 100 yards from me.  When I landed they had come closer. The man asked what I was doing and I told him I was taking scenic aerial photos. The man became very agitated and told me that was an invasion of privacy, and that I was taking pictures of his wife. The copter was about 200 feet in the air and at one point perhaps 50 yards to the side of the couple who were walking parallel to me. The camera was shooting super wide shots of subjects hundreds of yards away, not down at them.

Despite my assurances that I was shooting subjects far from them, the man was very irritated and kept insisting I was shooting pictures of his wife. I apologized for bothering him and offered to show him the photos, telling him that if a person was in the frame of the photo that person would be a tiny dot and completely unrecognizable. He did not believe me, yet declided to look at any images. At that point I apologized again and waited for them to walk away. I then packed up my bird and went somewhere else to fly.

I didn’t know that guy or his wife, and it is quite presumptuous to think I’m spending thousands of dollars and hundreds of hours of build and tweak time to capture a photo of some lady I don’t know, who isn’t nude sunbathing or a movie star or whatever. I don’t care who these people are. What would I do with pictures of this guy’s wife from 200 feet up? Sell them on ebay? Don’t flatter yourself.

While flying a very small quadcopter on my street about a year ago I had an irritated lady say that I could “steal her phone conversations.” I told her she should worry more about the NSA and her own government stealing that stuff than some hobbyist down the street.  This is another case of people assuming that a drone is evil, an invasion of privacy, and so on. I wasn’t stealing her conversations, I was trying to see if my retractable landing gear was working.

It is unfortunate that drones and regular drone flyers have to deal with these stereotypes and paranoias, but I guess that’s what happens when there are others out there who ruin it. These situations make me ponder all the ways one could more easily invade someone’s privacy than using a hard to fly, bad weather susceptible, short flight time, expensive, visible, flying noise machine with super wide angle lens. Let’s do it.

Note that none of these ways to invade someone’s privacy listed below involve piloting a super-expensive noise generating flying lawnmower with flashing lights and high visibility. The activities below can be done in much longer than 5-10 minute intervals (drone battery flight time).  Plus the activities produce much better data/results than a super-wide angle lens like on a GoPro, which distorts the images and makes people look like little dots in the picture unless the drone is hovering within a short distance of the subject.

#5: Look on the person’s Facebook page or other social networks.

Family on vacation? Perfect time to burglarize the house eh?  DUH.  Think twice about posting vacation photos on your social networks until you RETURN from the vacation!

#4: Hack into the person’s computer or Wi-Fi network.

#2: Use a camera with big fat zoom lens, or perhaps a telescope to spy on people.

From hundreds of feet away a noiseless high powered scope or camera can capture all sorts of juicy images and video without making a sound, and without crashing into the window of the person’s house when a gust of wind comes up.

#1: Peep into the target’s windows, spy over their fence, sneak into their yard or house.

How easy could it be? No expensive and noisy copter. No batteries. No remote. No dealing with weather.  Spying is best done hands-on!

This invasion of privacy is silent, effective, and probably costs less than many drones!

Perhaps the next time someone says I’m invading their privacy I might point out these items above. If I wanted to spy on them or invade their privacy, they would never know I did it.